A medley of some of my 1998-2011 works most of which not directly related to the "Parma Eldaliéva" project, even if some of them are Tolkien-inspired.
Artist & Calligrapher: Tsvetelina Krumova - Elmenel 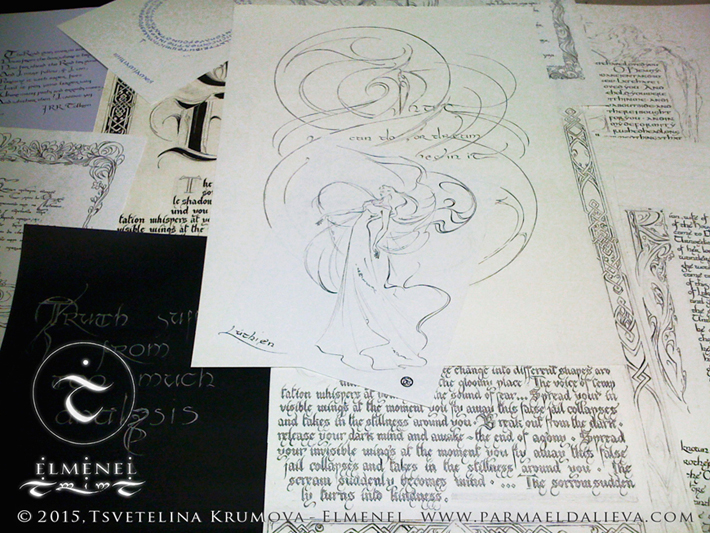 Forty-two years since J.R.R.Tolkien passed away. May God bless him!
May his good works live on! Gratitude and may his legacy be unstained and always shining with that light no darkness can reach!

"There, peeping among the cloud-wrack above a dark tor high up in the mountains, Sam saw a white star twinkle for a while. The beauty of it smote his heart, as he looked up out of the forsaken land, and hope returned to him. For like a shaft, clear and cold, the thought pierced him that in the end the Shadow was only a small and passing thing: there was light and high beauty for ever beyond its reach."
(J.R.R Tolkien, "The Lord of the Rings", Book Six, "The Land of Shadow")

The first "Parma Eldaliéva" Elven map of Middle-earth that is ready in a print version!

I refer to it as "Parma Eldaliéva: The Cantea Map" as it is the fourth ('cantea') of the "Parma Eldaliéva" maps according to the order of my work on those during the years. It is the second of the two largest maps of the project. Due to various circumstances, it became the first of them that has a print version.

To be fair, I am still getting used to the fact that I have done it, and the map is next to me now, and is good indeed... Even as it is a single map (and not yet a printed version of the 560-page "Parma Eldaliéva I" volume which is placed not far from it), when I look at it I see vindicated five years of my life spent in determined labouring on the development of the scripts I used for its making, of my hand and my skills in relation to them... I see something like a testament (or better say part of the testament I have been working on) of my deep love and respect for the works that inspired me, of the Word, of innate Artistry and talents' development, of the lifeblood and spirit-powered art of human hands, of the living letters untouched by a marred world that surrounds our bodies, of the dreams, hopes, rigorous practice, stubbornness, the steady evolution and improvement - maturing, if you wish - of the hands/scripts I have been working on... I look at it and I am thankful to God, and I feel gladness and something akin to both profound relief and thrill about the next works that I have in my mind and soul, which will benefit from the application and further development of the acquired skills...

Happy Birthday to Bilbo and Frodo Baggins!
And a photo of Gandalf in front of part of my art display at Oxonmoot 2014.